Showing posts with the label Wenger
Show all 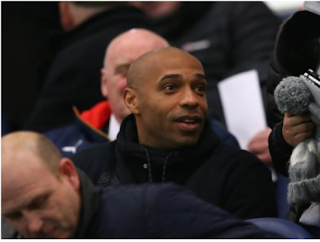 Henry has left his position as Arsenal youth coach over row with Arsenal manager, Arsene Wenger. It was reported that Wenger asked the Arsenal Legend to leave his position at Sky Sport as a pundit and focus on his Arsenal job.
Henry joined Arsenal as a youth coach for free after he turned down a paid offer for the job. He works four days a week at Arsenal. He earns €4 million a year for his pundit job at sky sport.
Wenger wanting Henry to leave Sky Sport may be related to Henry comments on Arsenal and Arsenal senior players which Wenger felt uncomfortable with. Henry had criticized Arsenal approach of recent and mostly some of his players especially Giroud and Wenger had been uncomfortable with these criticism and believe they are too harsh on his team.
Other sources believe that Wenger is uncomfortable with Henry presence around as Henry has made his intention to take over someday as manager and with a year left on Wenger contract, they felt he is uncomfortable with Henry around.
…
Post a Comment
Read more
More posts