Showing posts with the label uefa
Show all 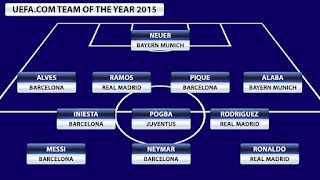 UEFA named its Team Of The Year and as usual the two Spanish Giants Real Madrid and Barcelona dominate the starting XI - without any surprise no player from the Premier League has been included in the Starting XI for 2015 even Eden Hazard was left out;what will Zidane think now.


Barcelona has 4 players in the team,Real Madrid manage to get 3 players including Ballon D'or Contender Christiano Ronaldo,Paul Pogba from Juventus made it for the first time in his young career and Bayern Munich stars completed the line-up with Manuel Neuer in goals and David Alaba at left-back.


Shockingly Luis Suarez were left out from the Starting XI and manage only a place in the Substitutes.
Alexis Sanchez was also no where to be seen even after his outstanding performance for Arsenal and winning the Copa America with Chile.Bizarre decision by UEFA to include James Rodriguez in place of Alexis.